Mar 07 Comments Off on Arteriovenous malformations

Arteriovenous malformations of the brain and spinal cord are classied as a category of diseases that involve the morphology of blood vessels. These are congenital anomalies and may involve arteries, veins, or even small (capillary) vessels. They can be imagined as a tangle of vessels, irregularly intertwined. The vessel wall is often fragile, or there may be communication between one vessel with vigorous blood flow and another whose wall is thinner, and therefore more vulnerable. The result is frequent hemorrhaging from these formations, causing hemorrhagic strokes. Typical arteriovenous malformation includes the vessels that carry blood to the area, the central formation (nidus, meaning nest) and the vessels that take blood away. Usually, the brain tissue is outside of these formations. Frequently, these malformations are manifested by seizures, due to the constant irritation of the brain by these vessels and their hemorrhaging.

Due to their morphology and the fact that they since birth, they bleed much more often than aneurysms, and they start at a younger age (about 10 years earlier). Their mortality is lower than aneurysms (~ 10%), but their morbidity is similar (30-50% chance of permanent neurological damage in every hemorrhage). They can manifest with chronic headaches, which may seem like migraines. It is a common cause of epilepsy, and may present with other neurological symptoms, either temporary or permanent, due to the fact that they can ‘steal’ quantities of blood that would otherwise perfuse the brain tissue (Subclavian Steal Syndrome).

The diagnosis is possible via computed tomography and magnetic resonance imaging. Digital angiography or spinal cord angiography may also be required. If the CT scans are carried out after the bleeding, the malformation may not be obvious within the hematoma. Therefore, intracerebral spontaneous (not traumatic) hemorrhaging in a young person raises the suspicion of vascular malformation.

Some of the symptoms are treated with medication. If this is not possible, or if the possible hemorrhaging is significant, then invasive treatment is required. This does not necessarily mean surgery

Removal of malformations, in the case that they do not share vascularity with normal tissue (brain or spinal cord) is the most effective treatment. In the case that there are veins in the brain that drain blood from both the lesion and the brain or spinal cord, then removal is more complicated. There are cases of epilepsy where in order to treat the seizures, both the malformation and the part of the brain that is subject to the chronic injury must be removed, and therefore it has become the cause of the seizures. Of course, this should have been clearly demonstrated through preoperative neurophysiological examination. If surgery needs to be avoided, there are alternative treatments.

The embolization is performed either in combination with the surgery (usually preoperatively) or independently, although in that case, the results are usually insufficient. In the case of radiosurgery (γ-knife), the results are better, and the goal can be achieved with a minimally invasive method. Its disadvantage, however, is that it is slow-acting (up to 2 years after surgery), so in the meantime, the risk of hemorrhaging remains.

When a blood vessel in the brain is blocked by a blood clot or any other cause, normal blood supply to the brain is affected. Nervous tissue tolerates cessation of circulation for only a few seconds. The damage then becomes irreversible, and this part of the brain would have now suffered an ischemic attack, resulting in disorders of speech, vision, mobility, sensation, perception of body position in space and more, depending on the affected area of the brain. Nerve cells are not replaced when damaged. If there is sufficient functional tissue remaining, it can be reprogrammed and the symptoms would be partially resolved. Sometimes the episode can be so severe that it causes coma or even death. In western societies, a stroke is the third leading cause of death following heart attack and cancer. It is more common in men, although it causes more deaths in women as compared to breast cancer.
There are also transient episodes, lasting for a few seconds, after which the functionality is fully restored. However, these are also of great clinical importance, and must be evaluated accordingly. Chronic damage caused by arteriosclerosis, i.e. the deposition of atheromatous plaques on the walls of the blood vessels, plays a crucial role in the manifestation of a stroke.

About 85% of strokes are ischemic, while the rest may be hemorrhagic, i.e. due to the rupture of blood vessels and formation of intracerebral hematoma, or a combination of blockage and rupture of a blood vessel or vessels.

Main causes of a Stroke

Apart from atherosclerotic plaques, which are more common in the carotid arteries (left and right), other causes of a vascular stroke, especially hemorrhagic stroke, are aneurysms, vascular malformations, poorly controlled hypertension, and others. Factors such as smoking indirectly cause ischemic attacks, through many mechanisms, such as those associated with increased atherosclerosis and poor blood oxygenation. 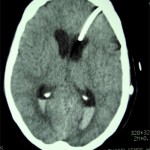 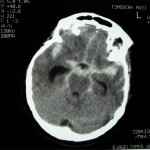 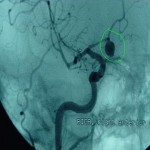 An aneurysm is a pathological bubble or sac that protrudes from the wall of a blood vessel. It can be formed either due to a congenital disorder in the quality of the vessel walls, or due to excessive strain of the vessels by the blood flow, especially in hypertension. This is why aneurysms are often at the locations where a vessel divides into branches. The thinned and strained vascular walls tend to rupture, causing cerebral hemorrhage. They often cause the so-called “subarachnoid hemorrhage” because the blood spreads under the coating of the brain called the arachnoid meninges. Subarachnoid hemorrhage is a very serious condition that requires immediate neurosurgical treatment and could very frequently lead to a coma, severe disability, or even death.

Treatment of a stroke When blood flow is found to be disturbed by atherosclerotic plaques that occupy at least 70% of the width of the vessel and causes symptoms such as transient ischemic attacks, then either balloon angioplasty or open surgery to remove the atherosclerotic plaque can be carried out (carotid endarterectomy). The patient would also receive anticoagulant treatment.

In case of an early diagnosis of ischemic stroke, i.e. within 6 hours of its onset, anticoagulant therapy can dissolve the clot and restore blood circulation to the affected area. However, this brings about increased risk of hemorrhaging, and must be done by specially trained physicians, and especially at the presence of a neurosurgeon.

IF SUCH SYMPTOMS EXIST, IMMEDIATE MEDICAL ASSISTANCE IS REQUIRED!

Prevention is the best treatment

With these steps, the risk of having a stroke is reduced by 80%!

What causes an aneurysm?

The exact causes of an aneurysm are not known. Diseases such as hypertensionm and other diseases such as polycystic kidney disease, lupus erythematosus, Erhlers Danlos syndrome, are often accompanied by an increased incidence and rupture of aneurysms. However, aneurysms can be completely asymptomatic and are often discovered by chance. It is estimated that 2-3% of people have a brain aneurysm, while in some regions and countries such as Finland, the percentage is much higher. It cannot be accurately calculated, but it is estimated that about half of them will rupture at some point in life.

How do I know if I have an aneurysm?

Mostly in case it bleeds, causing subarachnoid hemorrhage. It is almost always accompanied by a very strong headache, possibly loss of consciousness, and can cause cervical stiffness, pain along the spine, vomiting, photophobia, and neurological symptoms. It is a condition that requires immediate medical attention. In some cases, an aneurysm may not rupture, but it may grow large enough to exert pressure on the brain or the cranial nerves, especially those that control eye movements, and then a patient may would develop diplopia (double vision), or suffer drooping eyelid, epileptic seizure, dilation of the pupil (mydriasis), decreased visual acuity, and other symptoms.
Aneurysms can also be discovered accidentally, in a CT or MRI scan for another reason.

What happens when an aneurysm ruptures?

The hemorrhage extends to the area between the surface of the brain and its coating, called the arachnoid meninges. Sometimes it can extend into the brain or into the ventricles of the brain. A percentage of 10-15% of patients die before reaching the hospital. One month after the onset of hemorrhage, despite medical treatment, about 55% of patients will survive. Of those who survive, 30% will have permanent severe or moderate disability. Those who survive the initial episode would have a 15-20% chance of hemorrhaging again if the aneurysm is not treated within 2 weeks. The progression is worse in elderly patients. Therefore, treatment should be as immediate as possible, although there are special cases where immediate surgery is not indicated.

There seems to be an aneurysm on my CT/MRI. What can I do now?

The definitive diagnosis requires additional tests (digital angiography or 3D cerebral x-ray). With digital angiography, carried out only in the hospital under local anesthesia, a catheter is inserted from the femoral artery and reaches, under x-ray check, up to the arteries of the brain. A contrast agent is used to highlight the aneurysm. Three dimensional brain CT (3D-CT, CT-A) achieves a similar level of successful aneurysm imaging, without the need for anesthesia or artery catheterization. The contrast medium is injected through a common vein in the upper limbs.

What should I do if the diagnosis is definitive?

The good news is that many aneurysms will never rupture. The ISUIA study (International Study of Unruptured Aneurysms), (http://www.uscneurosurgery.com/aneurysm.html) showed that the risk ranges from 0.05 to 0.5% each year. Larger and irregularly shaped aneurysms, as well as those located in the posterior cerebral circulation (in the vertebral and basal arteries of the brain) may be more likely to rupture. Their treatment is not an easy decision to make. Obviously, the younger the person, the greater the chance of rupture (since the annual chances of rupture add up for many years). Thus, a 40-year-old person diagnosed with an aneurysm has about 0.25 x 40 = 10% chance of rupture by the age of 80. This percentage is obviously higher if poorly regulated hypertension or other morbidities coexist.

How are brain aneurysms treated?

Unfortunately, the most effective way is the most invasive, and that is surgery (craniotomy). We woul d place a small clip around the base of the aneurysm, in order to isolate it from the bloodstream. This operation is performed by experienced neurosurgeons, using a microscope and special micro-tools.

An increasingly common alternative is aneurysm embolization. With the aid of a technique such as digital angiography, a coil made of platinum (or other material), is inserted through a special catheter into the aneurysm and causes it to clot. The main advantage is that open surgery, that comes with some risks, is avoided, although surgery is generally considered to reduce the risk of aneurysm recurrence. Over half of the aneurysms are now treated with embolization, performed by specialized neurosurgeons or neuroradiologists.
In rare cases, these techniques may not be sufficient, and in these cases special surgeries are performed to bypass the aneurysm with a vascular graft; these are particularly demanding from an anesthesiological point of view. It may also be required to insert special tubes into the vessel, or completely block it, if the patient can tolerate it, in order to isolate the aneurysm from the blood circulation.